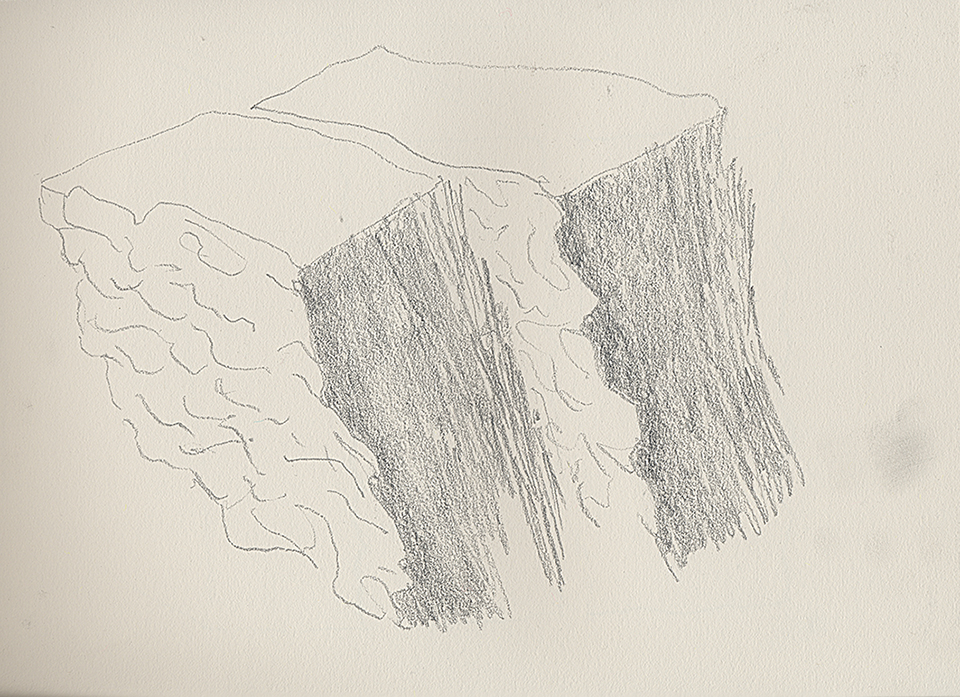 A dry stone waller in the English Lake District observes a piece of rock in his hand, contemplating its origin for a moment before settling it in place in a wall that he is repairing. It is a fine grained rock of mineral green with a white patina. It is not a local stone and probably the path to its origin follows the river upstream. He has observed the same flint-like rock up at Glimmer Crags, which he knows to be the site of a Neolithic axe quarry. He is reminded of a Jade axe featured on a radio programme1. The geological origin of the axe unearthed in southern England had been traced to an isolated rock in the Italian Alps. Remarkably, geologists had located a scar in the surface of the rock from where the material of the axe was excavated some 6,000 years ago. They speculated that the artefact had been worked both in Italy and France before its journey was intercepted in England, and transformation from rock to artefact completed. The juxtaposition of the stone axe with its geological origin had made the discovery particularly compelling. We might borrow Robert Smithson’s idea of ‘site’ and ‘non-site’ to describe this condition2.

As a landscape architect, I think of the notion of ‘site’ and ‘non-site’ as fundamental to an understanding of context. Materials procured for construction come generally from outside a site boundary and so most projects have a transformative effect on other landscapes. The quarries, pits and mines photographed by Edward Burtynsky confront us with the sublime reality of this transformative effect. Let us be influenced by these insights. The scale and complexity of the construction industry can reduce our receptivity to relationships between materials and their origins. The contemporary city has become an extraordinary conglomerate of granite, limestone, sandstone, slate, marble, brick, tile, concrete, steel, glass and plastic processed in- and sourced from multiple locations. We might synthesise the immeasurable activity as a single concept: We are geomorphic agents. Geomorphology is a global process so how might the poetic agency of a dry stone waller shaping the landscape stone by stone, like a river deposits its sediment, translate to a global scale? If we can collectively answer this through insightful material practice and profound exploration of context, we might not only address pressing ecological concerns but also foster the compelling narratives that help to secure a sense of place and time.